You can’t talk about centralization unless you first talk about how things currently work under a decentralized system. So I’ll address that first.

Many traditional universities (most? all?) take a decentralized approach toward their websites, both in terms of creation and maintenance. It’s thought that a decentralized structure where each division, school, college, department and administrative unit effectively controls their space and content on the web is the best way to manage the overall site. Core web teams tend to be small given the size of a university’s online presence so the thinking is “why not shift maintenance of each section of the site to their respective owners?” With a content management system in place, this becomes a matter of simplicity and smart workflow. The core web team creates the initial site based on each unit’s needs and wishes, the site is developed within the CMS, each unit gets trained on how to make updates through the CMS, and then the web team is freed up to go through the same process for the next unit on campus. Conventional wisdom would say this is a rational and reasoned approach, right?

Next, I’ll discuss the advantages of centralization. But before I get into it, let me provide context to the discussion.

I have no issue whatsoever with decentralization in terms of content. What I do have an issue with is decentralizing the management of other aspects of the web effort — strategy, IA, design and code. Decentralizing those aspects result in the pitfalls I outlined above. Now there’s always an exception to the rule, but those should be few and far between and that mantra holds true in this case.

In a nutshell, centralizing a site’s management should manifest itself in the opposite ways already outlined. Here’s the quick rundown:

However, all that said, centralization does raise issues. Most prominent is the fact that it’s a huge break from the past. The university has long given individual units large latitude in terms of how to run their groups. So much so, that the bigger units don’t even bother with the web team. Instead, they hire outside agencies to knock out whatever it is they need to accomplish. That’s just decentralization by another name though. Our biggest hurdle is the perception that centralizing the site will mean an inability to uniquely market each unit. The argument will go something like: the anthropology department will look like the political science department which will look like the music department and so on down the line.

That’s where the decentralized approach to content comes back into the picture. Content is the best, most efficient way to make your pitch. Yes, design, layout, colors, etc. influence decisions, but (and this is coming from a designer) it matters less that photos are floated left versus right compared to what those photos depict. It matters less that copy is Helvetica rather than Georgia than what the copy says. The ability to determine content is the ability to market.

What centralization ultimately allows is efficient, planned out efforts to roll out improvements and functionality in a consistent, controlled and timely manner based on visitor and university needs. The organization and visitors benefit while the web team stays sane.

Get out of the building indeed:

I specialize in [designing] downtowns, and when I am hired to make a downtown plan, I like to move there with my family, preferably for at least a month. There are many reasons to move to a city while you plan it. First, it’s more efficient in terms of travel and setting up meetings, something that can become very expensive. Second, it allows you to truly get to know a place, to memorize every building, street, and block. It also gives you the chance to get familiar with the locals over coffee, dinners in people’s homes, drinks in neighborhood pubs, and during chance encounters on the street. These nonmeetings are when most of the real intelligence gets collected.

It can be difficult for clients to approve just a handful of customer interviews on my projects. Seems like a silly quibble when judged against this.

Excerpt from Jeff Speck’s Walkable City: How Downtown Can Save America, One Step at a Time. 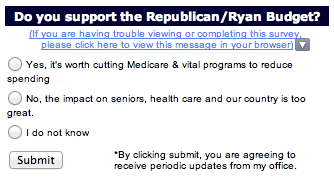 I received this survey from Diana Degette in one of her regular newsletters. It’s designed so poorly that you have to ask yourself “who would consider the results from this survey seriously?” Well, politicians would, that’s who.

You can ask a simple yes/no question on a survey, but the responses need to be yes and no. With this survey, both yes and no come with qualifiers that distort the true meaning of yes and no relative to the question asked. By including subjective qualifiers, the range of possible answers grows well beyond what’s presented and clearly skews any results received.

I answered “I do not know” just to see what the results looked like, but clicking through only took me to a thank you message. Where are the real time results? Oh, right, this is politics. You wouldn’t want to show the results since they may not project the bias you wish to impart. Of course, with the responses given, any results are biased toward DeGette’s viewpoint.

On top of all this, hitting the submit button automatically signed me up to get future mailings. That’s just wrong. Please don’t conflate a survey response with an affirmative decision on my part to sign up for your mailing list.

I’m now wondering, since the survey is flawed, whether the rest of the content in her mailings is also flawed. Can I trust Diana DeGette? Hmmm…

I had the privilege to sit alongside visual designer Geoff Thomas, developer Sean Dougherty and fellow UXer Jim Orsi as the panelists for the Caffeine, Bits & Pixels: Design & Tech Breakfast Panel, one of the many great sessions during this year’s Denver Startup Week.

The discussion covered a lot of ground, but was grounded in a common theme, that of the benefits of agile/lean work practices. It was readily evident that the industry is quickly moving past a waterfall process and all of its inherent side effects toward a much more inclusive, collaborative and responsive mentality. It’s powering the ability of web professionals to keep pace with the accelerating speed of web development while simultaneously increasing the value they bring to both clients and their customers.

Here are some of my takeaways:

I’ve used Photoshop for so long, I used to keep a backup copy of it on a floppy disk. Nonetheless, I’ve never really known how the blend modes worked. I simply experimented until wither my file looked the way I wanted it or I abandoned the exploration altogether (which was usually the case). Decades later, I come across this explanation. Too bad I don’t design much anymore.

Content is what ultimately matters in SEO, but if you are perceived not to have authority, great content won’t matter much

The elements of great game UX

What motivates people to play games?

Key Questions to ask when designing a game

Best practices for reframing game design (i.e. a game where people’s real world actions are reframed to be part of the game- think Foursquare)

As I make my exit from the University of Denver, I’ve decided to write one last series of posts outlining what I consider the state of social media at the university. To do so, I’d like to use The Community Roundtable’s Community Maturity Model as a starting point. The model is part of the Roundtable’s 2012 State of Community Management report. Below is the model with my determination of where DU sits. One caveat: I’ve ranked DU as a whole in this illustration rather than my department- MarComm- specifically. There’s a lot of variance in terms of social media sophistication across campus, so you may disagree with my overall ranking of DU and that’s OK. It’s probably worth ranking your own unit as a contrasting exercise to what I’ve provided. 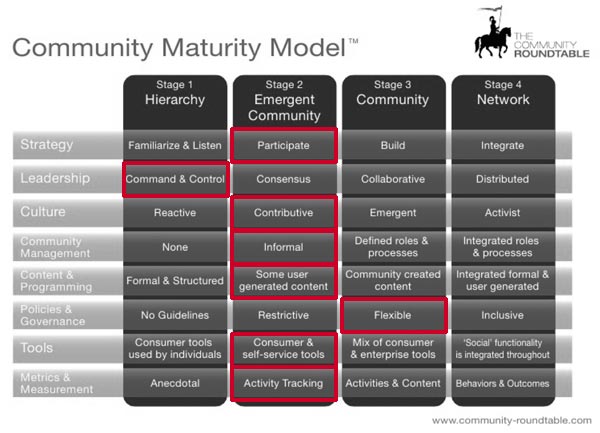 The eight competencies on the Y-axis are the building blocks of a successful social media program. The X-axis contain the maturity stages that organizations go through as their competency increases. Again, some units will rank higher or lower than what I’ve indicated, but as a whole, I’ve placed DU squarely in the “stage 2: emergent community” space.

While DU ought to advance into stage 3 and beyond, it can’t. Our culture of decentralization (endearingly referred to as “the silo effect”) is the root problem (depending on how many onion layers you care to peel). It creates a gulf between stage 2 and 3 which proves difficult for us to cross (and, indeed, most any other siloed organization). While tools and resources like Yammer and the WebEd series of in-person and online workshops were intended to create a mechanism to cross that gulf, they have only achieved limited success, if any. Other initiatives, like the Center for Teaching and Leraning’s video manager tool currently under development and the recently created marketing confab group that pools marketings from across campus together, continually get us closer, but they haven’t yet gotten DU to cross the gulf. So the question is: what will?

To answer that question we ought to ask why we should at all. Clearly, students live and breathe social media, an idea that has (and is) fueling novel ways for people, organizations and information to connect with one another. It provides an opportunity to better connect our community and it’s wealth of knowledge. Yet, DU was late to the game, officially speaking. Without systems, processes and resources for departments to leverage, siloed approaches once again took root with all of it’s associated issues.

As I look back on my 2 year tenure as a social media strategist at DU, I do see a desire across campus, at least on a grass roots level, to create a whole that is greater than the sum of the parts. Of course, differing agendas, incentive structures and many other factors keep grass root efforts at the grass roots level. I believe DU needs to undergo fundamental change in terms of centralization versus decentralization before social media (and the web in general) become a springboard to a better student experience, lower costs, greater efficiencies and a model of DU’s desire to be a great university dedicated to the public good.

I’m very interested in reading and seeing the rankings you create for your own unit or for your own institution. Feel free to add rankings, issues, opportunities and anything else that’s relevant in the comments.

Aside from the ever present issue that decks aren’t nearly as good without the accompanying audio, this is still great advice. And since the audio is missing, I like to add audio in my head as I read the slides. For this one, I chose Marlon Brando’s slow and deliberate pacing that feels nonchalant yet wise and worth your attention. Your mileage may vary on that choice.